Back in the beginning of photography, film and plates were orthochromatic. Orthochromatic means the material isn't sensitive to red light. That makes processing easier, since then it's possible to navigate a darkroom, load film, and even develop "by inspection".

But since any subject with the color red in it became darker with Ortho film, certain scenes became problematic. Blue skies were rendered white, skin color with more red pigment went dark, freckles and zits were emphasized.

In the early part of the 20th Century, panchromatic films became the norm. Ortho film was still the norm for many technical uses of photography. For example copywork, typesetting, etc. But with panchromatic film, tonalities of the world around us were more accurately mapped to their associated gray tones.

Today, when film photography itself is already a rarity, I've opted to play with the unusual characteristics of film including the color sensitivity. What happens to a red rose on a an orthochromatic film? Orthochromagic! 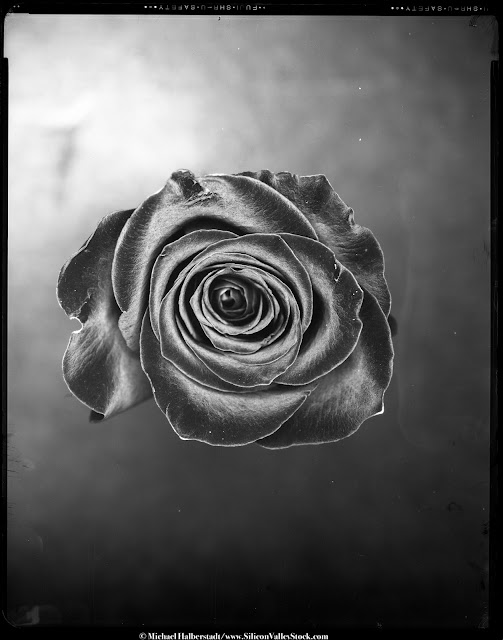 Popular posts from this blog

January 16, 2022
I've been working on another way to digitize my old negatives. 20 years ago, I was using a Nikon Coolscan. Looking at those files now, they're ok I guess. Better than nothing. I have an Epson V750, but especially for 35mm, those scans suck. I have access to a drum scanner, but those scans take so much time and work. In any case, I've come up with a method that I'm happy with. This isn't my technical blog, so I'm just gonna show you a few images from Czechoslovakia. Now that country was separated in the "velvet divorce," one of the few country split ups that was peaceful and civil. Back in 1991 when I first visited, Czechoslovakia had recently moved from a planned "socialist" economy towards a western style more capitalist democracy. Prague was a gritty, gray, yet beautiful city mostly visited only by foreigners from the East Block.  Czech out the gallery (isn't that punny?!) here . As always, words and pictures are copyright ©Michael Hal
Post a Comment
Read more

From the Archives: Above Silicon Valley

September 01, 2020
Well, it's still Pandemic time here. So I have fewer opportunities to create more material. When I can I'm hoping to highlight some of my favorite content from the good old days before the attack of the Orange Monster and the resulting disaster that keeps us cowering inside for a year. So here are some photos of Silicon Valley from above. These photos are a combination of photos from a few highrises I was able to get access to, as well as from the hills on either side of The Valley. Enjoy! Thanks for viewing! (all images copyright M Halberstadt)
Post a Comment
Read more